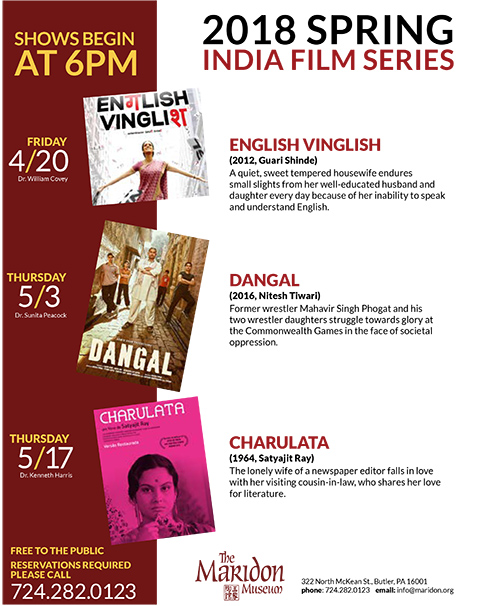 The Maridon Museum has announced three movies to be featured in the 2018 India Film Series. Exploring the life of a housewife struggling with language barriers, the challenges of a former wrestler and his daughters, and the love affair of a lonely wife of a newspaper editor, the Film Series illustrates the full range of Indian culture and heritage.
Shows begin at 6:00 p.m. at the Maridon Museum, 322 North McKean St., Butler, PA. Films are free, but reservations are required, please call 724.282.0123.
English Vinglish: April 20, 2018
(2012, Guari Shinde)
A quiet, sweet tempered housewife endures small slights from her well-educated husband and daughter every day because of her inability to speak and understand English.
Dangal: May 5, 2018
(2016, Nitesh Tiwari)
Former wrestler Mahavir Singh Phogat and his two wrestler daughters struggle towards glory at the Commonwealth Games in the face of societal oppression.
Charulata: May 17, 2018
(1964, Satyajit Ray)
The lonely wife of a newspaper editor falls in love with her visiting cousin-in-law, who shares her love for literature.
Click here to download flyer.