Necklace of 18 Lohans With Netsuke

We have the esteemed position of being the only jewelry being exhibited in the museum and the distinct honor of having once adorned the neck of Mary Hulton Phillips, founder of The Maridon Museum.

Mrs. Phillips purchased a box containing 18 ivory beads representing the 18 Lohans of the Chinese Buddhist Culture. She transformed us into a special necklace, which she wore with an appreciation for our cultural value. Lohans, having passed through the four stages of enlightenment to achieve the level of nirvana (a complete, peaceful absence of desire, suffering, and sense of self), were deemed worthy to be guardians of the great Gautama Buddha (Sakyamuni). They were known as his original disciples. Sculptures of the 18 Lohans adorned sacred temples in China, Korea, Tibet, and Japan. Please note that the center medallion is a netsuke sculpted in the form of a Buddha. This Buddha (Hotei in Japanese), with his smiling face and protruding belly, is known as The Laughing Buddha. He is the god of abundance and good health.

Once Mrs. Phillips’ dream of the museum was becoming a reality, we were deemed too precious to just be “hanging around,” so we became a permanent fixture in the Rear Gallery Ivory Exhibit. Interestingly, they placed sculptures of Lohans to guard us. Please stop by to see us the next time you’re here. 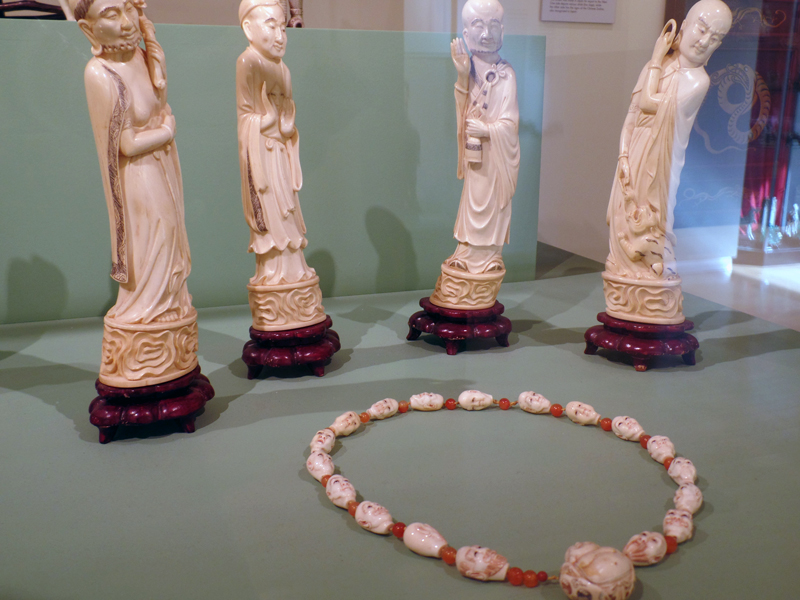